To Have and Have Not »

To Have and Have Not 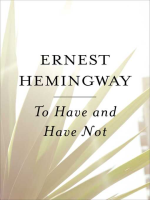 Description
American literary giant Ernest Hemingway received the Nobel Prize for Literature. Infused with love, betrayal, and death, To Have and Have Not is a thrilling adventure story from the 1930s featuring a strong protagonist who must face highly charged emotional and physical dilemmas. Harry Morgan is an honest man but he is forced into running contraband between Cuba and Key West in order to feed his family. His illegal dealings lead him into the world of wealthy yachtsmen and to an unlikely love affair. Eventually the smuggling costs him more than he could ever imagine. As the Cuban Revolution brews, Harry finds much more is at stake.
Also in This Series