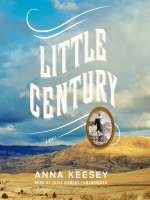 Orphaned after the death of her mother, eighteen-year-old Esther Chambers heads west in search of her only living relative. In the lawless frontier town of Century, Oregon, she's met by a sunburnt, laconic cattle wrangler: her distant cousin, Ferris Pickett. Within days, Esther is perjuring herself at the county clerk's office, swearing that she is twenty-one and ready for the rigors of homesteading. Pick leads her to a tiny cabin that shows daylight at the chinks, and Esther begins her new life on the small lake called Half-a-Mind. If she can hold out for five years, the land will join Pick's already impressive spread.

Land—there's a lot of it wide-open in Century but, somehow, not enough. Esther has arrived in the middle of a range war; it's cattle against sheep, and water's at a premium. Small incidents of violence swiftly escalate; before long, blood spills on the dry ground, and the railroad starts to think twice about laying tracks through Century. No railroad means no town, something Pick and his men will go to any lengths to prevent. Meanwhile, Esther finds her sympathies divided between her cousin and a sheepherder named Ben Cruff, a sworn enemy of the cattle ranchers. As her passion for Ben and her land grows, she begins to see how at odds these things are with her cousin's own interests. She can't be loyal to both; at some point she'll have to make a terrible choice.

Little Century maps our country's cutthroat legacy of dispossession and greed; it also celebrates the ecstatic visions of what America could become. Through Esther's story, which veers between triumph and heartbreak, we see the American West as it was being forged. In the tradition of classics like My Ántonia and There Will Be Blood, Little Century is a resonant and moving debut novel by a gifted writer.