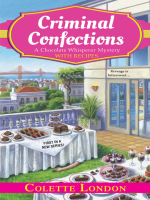 An expert chocolatier is out to catch a bitter killer when a colleague is murdered at a chocolate-themed resort in this cozy mystery series debut. Hayden Mundy Moore isn't just any chocolate expert. Known as the Chocolate Whisperer, she specializes in helping clients develop new products and revamp recipes until they're irresistible. She's bushwhacked through African jungles and haggled in exotic markets to locate the finest cacao beans. It's thrilling work but rarely dangerous—until a colleague turns up dead at the exclusive chocolate-themed Lemaître resort spa in San Francisco. Adrienne Dowling's heart attack is blamed on an accidental overdose of the secret ingredient used in Lemaître's new line of chocolates. But Hayden can't believe that her conscientious Adrienne would make such a careless mistake. Between chocolate body scrubs, cocoa mud baths, and seemingly endless chocolate treats, Hayden starts to suspect that she, not Adrienne, was the intended target. Now finding the killer among the rival chocolatiers won't just be satisfying—it might save her life. Includes an irresistible chocolate recipe!