Marry Me: A Romance 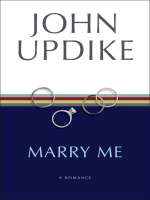 Marry Me is subtitled "A Romance" because, in the author's words, "people don't act like that anymore." The time is 1962, and the place is a fiefdom of Camelot called Greenwood, Connecticut. Jerry Conant and Sally Mathias are in love and want to get married, though they already are married to others. A diadem of five symmetrical chapters describes the course of their affair as it flickers off and on, and as their spouses react, in a tentative late-summer atmosphere of almost-last chances. For this is, as Jerry observes, "the twilight of the old morality, and there's just enough to torment us, and not enough to hold us in."