Angel Flying Too Close to... »

Angel Flying Too Close to the Ground 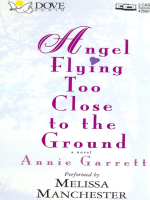 In high school, Tess and Jamie had something special going: the football star with the great voice was also an orphan, and he built his hopes and dreams around the girl he loved. But Tess' Father believed she was meant for greater things, and so, against her will, Tess left Jamie behind. Now, 10 years later, at the height of her success as a celebrity journalist in New York City, Tess walks around with a shell encircling her heart. Until she is issued a startling assignment: return to her beloved Ozarks, to Branson, to interview "Buck Campbell", previously known as Jamie, now a famous country signer known from coast to coast. A novel that will touch reader's hearts the way The Bridges of Madison County did, this is the story of the first love left behind but never forgotten, of the path not taken, of a one-time chance at rekindled passion.