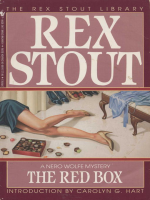 Description
A lovely woman is dead, and the fortunes of overextended theatrical producer Llewellyn Frost depend on solving the mystery of the red box: two pounds of candied fruits, nuts and creams, covered with chocolate—and laced with potassium cyanide. When Nero Wolfe’s suspicion falls on Frost’s kissing cousin, Frost wants the detective to kill the sickly sweet case—before it kills him.

“It is always a treat to read a Nero Wolfe mystery. The man has entered our folklore.”—The New York Times Book Review

A grand master of the form, Rex Stout is one of America’s greatest mystery writers, and his literary creation Nero Wolfe is one of the greatest fictional detectives of all time. Together, Stout and Wolfe have entertained—and puzzled—millions of mystery fans around the world. Now, with his perambulatory man-about-town, Archie Goodwin, the arrogant, gourmandizing, sedentary sleuth is back in the original seventy-three cases of crime and detection written by the inimitable master himself, Rex Stout.
Also in This Series