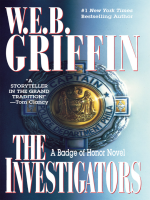 Description
Just as with his remarkable military novels, millions of readers have been captured by the rich characters and crackling realism of Griffin's police dramas. "Griffin has the knack," writes The Philadelphia Inquirer . "He sets his novel before you in short, fierce, stop-for-nothing scenes. Before you know it, you've gobbled it up." Now in Book VII, The Investigators, circumstances force Special Operations detective Matt Payne abd his colleagues into the middle of two major cases simultaniously. With the commission of a brutal crime, an ongoing investigation into a squad of dirty cops suddenly turns ugly, and Payne must track down a key peice of evidence before things become even worse. At the same time, a woman he meets at a party may turn out to be a vital link to a group of urban terrorists, and if he doesn't follow it up now, the lead will disappear. During the next few days, as he juggles both cases and in an increasingly complicated personal life, Payne finds himself drawn deeper and deeper into the circle of some very dangerous characters, and soon comes to realize that it may take all of his skills not only to prevail - but perhaps even to survive. From the cop on the beat to the Commissioner himself, Griffin weaves a story of men and women who put their lives on the line every day. It is a chronicle filled with fears, dangers, courage, loyalty, and genuine heroism: police drama at its best.
Also in This Series