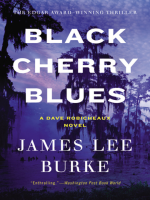 In this Edgar Award-winning thriller, former Louisiana homicide cop Dave Robicheaux is trying to start a new life after the murder of his wife-but he can't escape his past forever.

Dave Robicheaux was once a Louisiana homicide cop. Now he's trying to start a new life, opening up a fishing business and caring for his adopted girl, Alafair. Compared to Louisiana, Robicheaux thought Montana would be safe — until two Native American activists suddenly go missing. When Robicheaux begins investigating, he is led into the dark world of the Mafia and oil companies. At the same time, someone from his past comes back to haunt him. Someone who was responsible for Robicheaux's flight from New Orleans — someone who brutally murdered his wife — and now is after young Alafair ... Winner of the Edgar Award for Best Novel, Black Cherry Blues spans from the mystical streets of New Orleans to the endless mountains of Montana, and ranks among James Lee Burke's finest work — an enduring classic , darkly beautiful and thrilling.