Men in the Making »

Men in the Making: stories 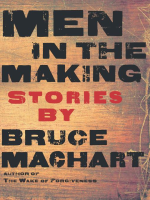 Description
A collection of "artful, emotional" and "manly" short stories from the acclaimed author of The Wake of Forgiveness ( Dallas News ). From the critically acclaimed author of The Wake of Forgiveness --"a mesmerizing, mythic saga," as described by the New York Times --come ten remarkable stories that uncover unexpected beauty in the struggles of the modern American male. Like Richard Russo, Bruce Machart has a profound knowledge of the male psyche and a gift for conveying the absurdity and brutality of daily life with humor and compassion. Whether they find themselves walking the fertile farmland of south Texas, steering trucks through the suffocating sprawl of Houston, or turning logs into paper in the mills just west of the Sabine River, the men of these stories seek to prove themselves in a world that doesn't always welcome them. Here are men whose furrows are never quite straight and whose hearts are near to bursting with all the desires they have been told they aren't supposed to heed. "Bruce Machart is one of our most ambitious and fearless young writers. With Men in the Making , he has composed a remarkable paean to the complex fragility of the American male. I read these stories in a state of tender amazement."--Steve Almond, author of Rock and Roll Will Save Your Life
Also in This Series