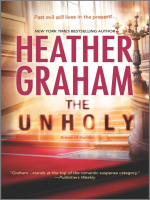 Description
The remake of a classic horror film awakens something violent from the past, and only the Krewe of Hunters can stop it, in book 6 of the fan-favorite suspense series, only from New York Times bestselling author Heather Graham.
At Hollywood's Black Box Cinema, a young starlet dies a terrifying death.
When a movie mogul's son is charged with the grisly murder, he calls agent Sean Cameron, who specializes in irregular investigations. As part of the FBI's paranormal team, Cameron knows that nightmares aren't limited to the silver screen.
Working with special-effects artist Madison Darvil—who has her own otherworldly gifts—Cameron delves into the malevolent force animating more than one movie monster. But will they be in time to stop the next noir scenario come to life?