Tell Me You Love Me »

Tell Me You Love Me 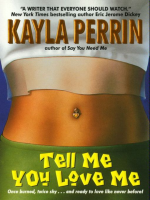 When Sheldon Ford walked into her life, Tyanna Montgomery thought she had been carried up to heaven on the strong wings of a sexy black angel. But when he disappeared, she came crashing down to earth. Now he's back with some wild tale about having been undercover to take down a Miami mob-boss — which means he's either big trouble or flat-out crazy, and either way Tyanna should let him go. But damn if the man doesn't still make her heart race and her body ache with wanting him!

Sheldon should never have returned — and now he's put his sweet woman in serious danger! But living without Tyanna's loving would not be living. Though she doesn't believe a word of his story, that doesn't make the threat less real — and he'll protect his ebony queen to his last breath. But will she still want him when she realizes that taking a chance on this love means risking a lot more than her heart?