Debriefing the president: the interrogation of Saddam Hussein 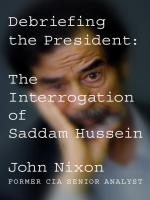 Description
A riveting, revealing and newsmaking account of the CIA's interrogation of Saddam Hussein, written by the CIA agent who conducted the questioning. "Mr. Nixon, the first C.I.A. officer to interrogate Hussein after his capture in December 2003, reveals gobsmacking facts about that deposed Iraqi leader that raise new questions about why the United States bothered to invade Iraq to oust him from power. These details will likely appall Americans who have watched their nation's blood and treasure wasted in Iraq ever since.... More broadly, Mr. Nixon offers a stinging indictment of the C.I.A. and what he sees as the agency's dysfunctional process for providing intelligence to the president and other policy makers.... Mr. Nixon's book comes at an extraordinary moment, when President-elect Donald J. Trump is already at war with the C.I.A...."Debriefing the President" will add fuel to the fire of the Trump-led criticism. It will also send a chilling warning to anyone counting on the C.I.A. to stand up to Mr. Trump once he is in office." - James Risen, The New York Times "Gripping...Nixon's book, Debriefing the President, gives more ammunition to the skeptics; indeed, some of its contents can only be described as sensational." - John Cassidy, The New Yorker "Nixon captures the psychological give-and-take of these exchanges [with Saddam Hussein] with gripping readability...and he describes the resultant verbal sparring with a sharp ear for nuance." - Steve Donoghue, The Christian Science Monitor "A damning indictment of the perversion of a major intelligence service by little minds inside and above it." -The Times of London Debriefing the President presents an astounding, candid portrait of one of our era's most notorious strongmen. Nixon, the first man to conduct a prolonged interrogation of Hussein after his capture, offers expert insight into the history and mind of America's most enigmatic enemy. After years of parsing Hussein's leadership from afar, Nixon faithfully recounts his debriefing sessions and subsequently strips away the mythology surrounding an equally brutal and complex man. His account is not an apology, but a sobering examination of how preconceived ideas led Washington policymakers--and the Bush White House--astray. Unflinching and unprecedented, Debriefing the President exposes a fundamental misreading of one of the modern world's most central figures and presents a new narrative that boldly counters the received account.
Also in This Series