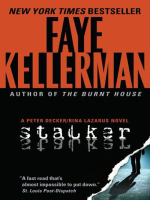 A first-year rookie with the LAPD's Hollywood Division, Cynthia Decker became a cop against her father's wishes. But police work is in her blood, and she's determined to make it on her own, without Peter Decker's help. Although her time in uniform has been brief, her instincts for danger are already razor sharplike the electric tingle that is telling her something is very wrong . . . right now.

It begins with a nagging sense that she is being watched, that little things are being moved around in her apartment. The feeling of dread escalates when she finds that some personal effects have been crudely destroyed. But it's a harrowing trip down a dark canyon road that substantiates Cindy's worst fear: For some unknown reason someone fiendishly relentless-someone with decidedly evil intentions-is stalking her.

Cindy is fiercely independent, and her stubborn pride will not allow her to confide in her father-nor can she seek the guidance and advice of her stepmother, Rina. And as Decker's own investigation into a particularly heinous string of carjackings further isolates him from his daughter's troubles, Cindy covertly begins to probe her personal and professional lives for the identity of the person who wants her frightened, harmed . . . or dead. As her stalker grows bolder and more devious, Cindy finds her options limited, her friends and colleagues off-bounds-as the well-concealed rages and dark secrets of those surrounding her slowly come to light and threaten to pull a nightmare out of the shadows and in for the kill.