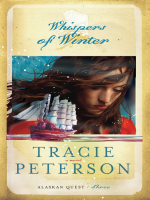 Description
With this riveting historical novel, Tracie Peterson concludes a CBA best-selling series that includes Under the Northern Lights. Set amidst the frozen wilds of 1917 Alaska, this finale skillfully weaves an enthralling plot with an uplifting message of God's faithfulness in trials. With Leah's husband and brother still lost in the Arctic, it's difficult for her to sustain hope. She values her friends and treasures her one-year-old twins. But what if both men remain forever frozen in Alaska's cruel embrace?
Also in This Series