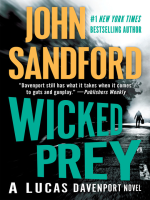 For twenty years, John Sandford's novels have been beloved for their "ingenious plots, vivid characters, crisp dialogue and endless surprises" (The Washington Post), and nowhere are those more in evidence than in the sudden twists and shocks of Wicked Prey. Out of Lucas Davenport's past comes a psycho nursing a violent grudge. But why go after Davenport for revenge when Davenport's young daughter is so close-and so vulnerable?