Pontoon: a novel of Lake Wobegon 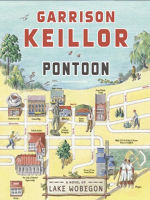 Description
The fictional Minnesota town of Lake Wobegon is real to millions of A prairie home companion fans, who tune in each week for the latest news about its strong women and good-looking men. Like Sinclair Lewis's Gopher Prairie, it is part of literary legend. Four novels have been set among its quiet streets: Lake Wobegon days, Wobegon boy, Lake Wobegon summer 1956, and now Pontoon. Garrison Keillor's latest book is about the wedding of a girl named Dede Ingebretson, who comes home from California with a guy named Brent. Dede has made a fortune in veterinary aromatherapy; Brent bears a strong resemblance to a man wanted for extortion who's pictured on a poster in the town's post office. Then there's the memorial service for Dede's aunt Evelyn, who led a footloose and adventurous life after the death of her husband 17 years previously. Add a surprise boyfriend and a band of newly arrived Mormon missionaries, and the gently rendered chaos is complete. Full of richly drawn characters, sly wit, and indelible descriptions of everyday life in the heartland, Pontoon is another unforgettable portrait of the little town we love.
Also in This Series