Yarn Harlot: The Secret Life of a Knitter 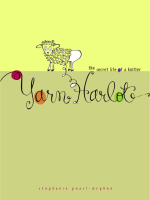 Stephanie Pearl-McPhee's deepest wish is that everyone understand that knitting is at least as fun as baseball and way cooler than the evil looped path of crochet. Every project, from a misshapen hat to the most magnificent sweater, holds a story. Yarn Harlot tells all those stories with humor, insight, and sympathy for the obsessed.

Over 50 million people in America knit. The average knitter spends between $500 and $1,700 a year on yarn, patterns, needles, and books. No longer just a fad or a hobby, knitting has advanced to a lifestyle.

Yarn Harlot: The Secret Life of a Knitter moves beyond instructions and patterns into the purest elements of knitting: obsession, frustration, reflection, and fun. Stephanie Pearl-McPhee's humorous and poignant essays find humor in knitting an enormous afghan that requires a whopping 30 balls of wool, having a husband with size 13 feet who loves to wear hand-knit socks, and earns her yarn harlot title with her love of any new yarn—she'll quickly drop an old project for the fresh saucy look of a new interesting yarn.

Since the upsurge in knitting began in the early '90s, the number of women under 45 who knit has doubled. Knitting is no longer a hobby for just grandmothers—women and men of all ages are embracing this art. Describing its allure is best left to Stephanie who explains: It is a well-known fact that knitting is a sparkling form of entertainment, as spiritual as yoga, as relaxing as a massage, and as funny as Erma Bombeck trapped in a PTA meeting.