The Cat Who Killed Lilian... »

The Cat Who Killed Lilian Jackson Braun: A Parody 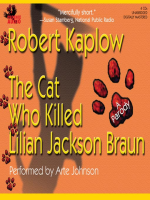 America's beloved writer, Lilian Jackson Braun, author of twenty-four Cat Who...mysteries, is now the subject of a mystery herself. In Robert Kaplow's brilliant and bawdy parody, Ms. Jackson's headless body has been discovered in the men's room of a bar in Lower Manhattan. The police are busy filming reality television shows, and so it falls to Braun writer friend James Qafka and his Siamese cats, Ying-and Poon-Tang, to solve the ghastly mystery. Q.'s quest leads him on a wildly satirical chase that combines the spirits of Lenny Bruce, Dashiell Hammett, and the Hope/Crosby "Road" pictures. Before it's over, we're encountered a Pulitzer Prize-winning novelist, a sex-starved suburban housewife, a mysterious Hollywood diary, Harry Houdini, a sinister cult, and two gifted cats who lead Q. and his spunky undergraduate assistant to finally unravel the riddle of The Cat Who Killed Lilian Jackson Braun.