In the Belly of the Bloodhound: Being an Account of a Particularly Peculiar Adventure in the Life of Jacky Faber 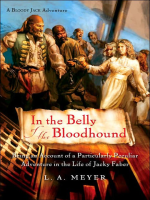 Now that the King of England has called her a pirate and put a price on her head, Jacky Faber has no choice but to stay out of sight. Hoping for a safe hiding place, she returns to the Lawson Peabody School for Young Girls in Boston, but the calm doesn't last long. On a class field trip to Boston Harbor, the girls are abducted and forced into the hold of the Bloodhound, a ship bound for the slave markets on the Barbary Coast where they will be put up on the auction block and sold into Arab harems. Jacky wouldn't dream of going down without a fight, but the delicate Lawson Peabody girls are in over their heads. Although Jacky will use anything in her arsenal to help her well-heeled classmates, she isn't so certain they will find the strength and courage needed to survive. But if she can convince them to trade petticoats and propriety for her daring escape plan, the girls just might become their own rescuers.