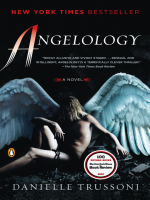 Description
Set in the secluded world of cloistered abbeys, long-lost secrets and angelic humans, Angelology has all the makings of a blockbuster hit, combining elements of The Da Vinci Code and Kate Mosse's Labyrinth Sister Evangeline was just a young girl when her father left her at St. Rose Convent under the care of the Franciscan Sisters of Perpetual Adoration. Now a young woman, she has unexpectedly discovered a collection of letters dating back sixty years - letters that bring her deep into a closely guarded secret, to an ancient conflict between the millennium-old Society of Angelologists and the monstrously beautiful Nephilim, the descendants of angels and humans. Rich and mesmerizing, Angelology blends biblical lore, mythology and the fall of the Rebel Angels, creating a luminous, riveting tale of one young woman caught in a battle that will determine the fate of the world.
Also in This Series