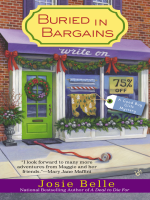 Description
Maggie Gerber and those discount divas, the Good Buy Girls, are gearing up for their first big holiday thrift shop sale. But one of the Girls, Joanne Claramotta, pregnant with her first child, is acting less than festive. It could be hormones. Or it could be Diane Jenkins, the young knockout her husband, Michael, hired as his new deli assistant. Calming Joanne's nerves proves impossible when Maggie finds Michael unconscious on his deli floor and with Diane next to him, strangled to death with her apron strings. Then Maggie discovers something even more disturbing. There's no record of Diane having been hired. In fact, she has no history at all. It's as if she never even existed. Now Maggie fears that unwrapping Michael's secrets could really kill her holiday spirit.
Also in This Series