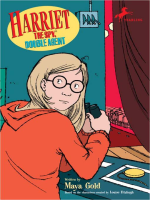 Description
Harriet is impressed to learn that the girl she has befriended, now called Annie Smith, is the person who not only created three names-Rosarita Sauvage, Yolanda Montezuma, and Zoe Carpaccio-but also three distinct personalities to match. This girl has potential. Being a spy has always been rather solitary, so Harriet is glad to have a new friend and spy partner. But then Harriet realizes that Annie reveals very little about herself, and indeed, is not telling the truth about where she goes and who she meets on the weekend. Sport says he's in love with the girl, but Annie lets drop she's in love with an older man. Harriet can't understand anything at all about this thing called love-even when she asks Ole Golly for advice, she still wonders. But as Harriet unravels Annie's mystery, she comes to appreciate the many different kinds of love there are. Praise for Harriet the Spy® and Her Friends Harriet the Spy ® "Harriet is . . . wholly relatable whether you're eleven or several times that age."-- EW.com Harriet Spies Again By Louise Fitzhugh and Helen Ericson Winner of the Edgar Award for Best Juvenile Novel "Ericson has perfectly captured the voice and pacing of Fitzhugh's original novel in a seamless rendering of a fresh, enjoyable story for today's readers." -- School Library Journal Harriet the Spy, Double Agent By Louise Fitzhugh and Maya Gold "Harriet the Spy is back, and Gold does a credible job of maintaining the special character and her crusty charm." -- Booklist The Long Secret [ STAR ] "Written with subtlety, compassion, and [Louise Fitzhugh's] remarkable ability to see inside the minds of children." -- School Library Journal, Starred Sport [ STAR ] "A worthy successor to Harriet the Spy --and that is high tribute." -- Booklist, Starred
Also in This Series