The Unforgiving Minute: a soldier's education 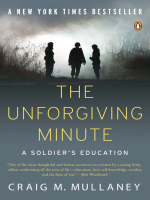 Description
“The Unforgiving Minute is one of the most compelling memoirs yet to emerge from America's 9/11 era. Craig Mullaney has given us an unusually honest, funny, accessible, and vivid account of a soldier's coming of age. This is more than a soldier's story; it is a work of literature." —Steve Coll, author of the Pulitzer Prize-winning Ghost Wars and The Bin Ladens"One of the most thoughtful and honest accounts ever written by a young Army officer confronting all the tests of life." —Bob Woodward In this surprise bestseller, West Point grad, Rhodes scholar, Airborne Ranger, and U. S. Army Captain Craig Mullaney recounts his unparalleled education and the hard lessons that only war can teach. While stationed in Afghanistan, a deadly firefight with al-Qaeda leads to the loss of one of his soldiers. Years later, after that excruciating experience, he returns to the United States to teach future officers at the Naval Academy. Written with unflinching honesty, this is an unforgettable portrait of a young soldier grappling with the weight of war while coming to terms with what it means to be a man.
Also in This Series