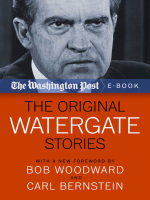 Description
"5 Held in Plot to Bug Democrats' Offices": The legendary articles that exposed a crime, ended a presidency, and changed a nation. The Washington Post 's seminal Watergate stories have been gathered together for the first time as an e-book, including a foreword by journalists Bob Woodward and Carl Bernstein assessing the impact of their stories decades later. "5 Held in Plot to Bug Democrats' Offices Here", said the headline at the bottom of page one in the Washington Post on Sunday, June 18, 1972. The story reported that a team of burglars had been arrested inside the offices of the Democratic National Committee in the Watergate office complex in Washington. On assignment, Carl Bernstein and Bob Woodward uncovered a widespread political scandal and cover-up at the highest levels of government, culminating with the resignation of President Richard Nixon. The Post won a Pulitzer Prize for its work, which became the subject of two bestselling books and a renowned movie, All the President's Men . This eBook is a look back at the dramatic chain of events that would convulse Washington for two years and lead to the first resignation of a U.S. president, forever changing American politics.
Also in This Series