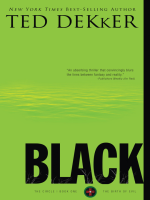 Description
Some say the world hangs in the balance of every choice we make. Now the fate of two worlds hangs in the balance of one man's choices in this adrenaline-laced epic where dreams and reality collide. Fleeing assailants through deserted alleyways, Thomas Hunter narrowly escapes to the roof of a building. Then a silent bullet from the night clips his head . . . and his world goes black. From the blackness comes an amazing reality of another world where evil is contained. A world where Thomas Hunter is in love with a beautiful woman. But then he remembers the dream of being chased through an alleyway as he reaches to touch the blood on his head. Where does the dream end and reality begin? Every time he falls asleep in one world, he awakes in the other. Yet in both, catastrophic disaster awaits him . . . may even be caused by him. From New York Times bestselling author Ted Dekker, experience the novel that launched The Circle and first invited readers to dive deep. Praise for Ted Dekker: “Just when I think I have Ted Dekker figured out, he hits me with the unexpected. With teasing wit, ever-lurking surprises, and adventurous new concepts, this guy could become a read vanguard in fiction.” —FRANK PERETTI “Put simply: it’s a brilliant, dangerous idea. And we need more dangerous ideas . . . Dekker’s trilogy is a mythical epic, with a vast, predetermined plot and a scope of staggering proportions . . . Black is one of those books that will make you thankful that you know how to read. If you love a good story, and don’t mind suspending a little healthy disbelief, Black will keep you utterly enthralled from beginning to . . . well, cliffhanger. Red can’t get here fast enough.” —Robin Parrish, author and journalist “As a producer of movies filled with incredible worlds and heroic characters, I have high standards for the fiction I read. Ted Dekker’s novels deliver big with mind-blowing, plot-twisting page-turners. Fair warning—this trilogy will draw you in at a breakneck pace and never let up. Cancel all plans before you start because you won’t be able to stop once you enter Black.” —RALPH WINTER, Producer—X-Men, X2: X-Men United, Planet of the Apes; Executive Producer—StarTrek V: Final Frontier “Black has to be the read of the year! A powerful, thought-provoking, edge-of-your-seat thriller of epic proportions that offers great depth and insight into the forces around us.” —JOE GOODMAN, film producer, Namesake Entertainment Full-length epic fantasy Includes discussion questions for book clubs Part of the Circle Series Book One: Black Book Two: Red Book Three: White Book Four: Green
Also in This Series