Not quite a wife »

Not quite a wife 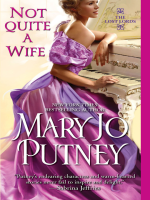 Marry in haste, repent at leisure.

James, Lord Kirkland, owns a shipping fleet, half a London gaming house, and is a ruthlessly effective spymaster. He is seldom self-indulgent . . . except when it comes to the gentle, indomitable beauty who was once his wife.

Laurel Herbert gave James her heart as an innocent young girl - until she saw him perform an act of shocking violence before her very eyes. That night she left her husband, and he let her go without a word of protest.

Now, ten years later, a chance encounter turns passionate, with consequences that cannot be ignored. But as they try to rebuild what was broken, they must face common enemies and a very uncommon love . . .

'Of all Putney's heroes, the Lost Lords are the most irresistible - bad boys who are so very good.' RT Book Reviews