The Cradle in the Grave »

The Cradle in the Grave 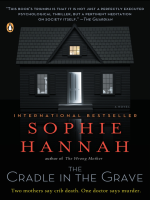 "A perfectly executed psychological thriller" (The Guardian) from the internationally bestselling author of The Wrong Mother and The Other Woman's House Television producer Fliss Benson is surprised to discover that her superstar boss, Laurie Nattrass, is stepping down from his post. She's even more surprised that he asks her to take over his documentary about crib-death mothers wrongly accused of murder. Thanks to Laurie's advocacy, three women are now free, while the doctor who testified against them is under investigation for misconduct. Then one of the mothers is found dead. In her pocket is a card with sixteen numbers on it, arranged in four rows of four- exactly like the anonymous card Fliss has just received in the mail. The fifth book in Sophie Hannah's beloved Zailer and Waterhouse series, The Cradle in the Grave combines the puzzle of a Golden Age mystery with a masterful tale of psychological suspense that Tana French and Laura Lippman fans will love.