All He Wants for Christmas »

All He Wants for Christmas 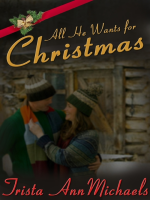 Description
Kaycee never forgave Mike for his betrayal, and for ten long years, she's avoided contact with him. Now her mother has conspired to force a meeting. Trapped in a mountain cabin over the holiday, sparks will fly and passion flare as Kaycee and Mike learn to leave the past behind.
Ten years ago, Kaycee Mathews broke off her relationship with the love of her life, Mike Donovan, when she found him in the arms of another woman. Refusing to listen to any explanations, she cut off all contact, spending the time since then jumping from one bad relationship to another.
Mike was no better off. He longed to reunite with Kaycee, but didn't know how he'd ever be able to break through the wall of resistance she'd built around herself.
Finally, after years of watching her daughter and the young man she'd come to think of as a son suffer because of foolish pride, Kaycee's mother takes matters into her own hands and tricks them into coming to her mountain cabin. Neither knows the other will be there, but she's convinced once they're face-to-face, they'll hash out their problems. Even nature seems to be on her side when a massive snowstorm hits, stranding the two of them on the mountain alone.
Kaycee is stubborn, but Mike is determined and not above using seduction to get what he wants. Sparks fly, heating up the tiny cabin as well as the two occupants inside, making for an interesting holiday weekend. Can Mike win her back and get all he wants for Christmas?
Also in This Series