The Price Of Power »

The Price Of Power 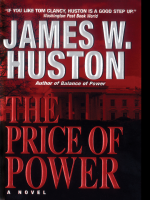 Congressional aide Jim Dillon discovered a little- known provision in the U.S. Constitution, and it plunged the federal government into chaos. Now he struggles to gain control over the extraordinary events his actions precipitated, volunteering for the defence team at the court martial of Admiral Ray Billings, who disregarded a presidential order by leading an assault on foreign terrorists.

Meanwhile, in the South Pacific, a fanatic plans to exploit the weaknesses of an American government in upheaval by brutally shedding American blood and taking innocent citizens hostage. But nothing will prevent a great nation from doing what is right, no matter what the price, not when the honour and the future of America is at stake.