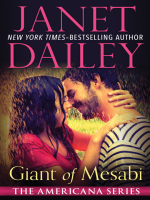 A forbidden passion is forged on Minnesota's iron range in the series that sets a romance in each state from the New York Times–bestselling author. Every novel in this collection is your passport to a romantic tour of the United States through time-honored favorites by America's First Lady of romance fiction. Each of the fifty novels is set in a different state, researched by Janet and her husband, Bill. For the Daileys it was an odyssey of discovery. For you, it's the journey of a lifetime. Your tour of desire begins with this story set in Minnesota. Tension grew between them, angering Alanna. "Hate me if you want/" The grooves near Rolt's mouth deepened sardonically. "But you will be mine- in every way!" Alanna gasped with surprise. Rolt's boldness was unbelievable. He knew that she was in love with Kurt. How could he have the audacity to claim his brother's girl? Well, this was one time the arrogant, egotistical Rolt Matthews wouldn't get what he wanted, Alanna thought defiantly. She just wouldn't cooperate. No matter what he said, Rolt couldn't make her marry him against her will . . .