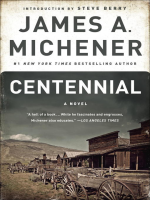 Description
Written as a tribute to America's bicentennial celebration. Centennial is an epic novel of the history, land, and people of Colorado. Centered around the fictional town of Centennial, the story contains an extensive cast of characters including Native Americans, French fur trappers, English noblemen, and American cowboys, all caught up in the dramatic events and violent conflicts that shaped the destiny of the legendary West.
Also in This Series