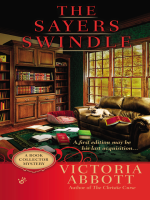 Description
Jordan Kelly is delighted to make money tracking down rare and valuable mystery novels for her employer, Vera Van Alst, an avid collector and the most difficult woman in  Harrison Falls, New York. But now her boss’s complete set of Dorothy Sayers is missing, and finding them may lead Jordan to a murder suitable for Sayers’s esteemed sleuth, Lord Peter Wimsey… When Jordan manages to locate her boss’s missing books, they are in the possession of Randolph Adams, an elderly man in a nearby town. Offering a valuable Hemingway first edition as an incentive, Jordan thinks she’s about to seal the deal—but some of Randolph’s relatives think he should hold out for more. Then the entire family disappears—and a dead body shows up.  It’s up to Jordan to collect the clues—and make sure a killer gets booked.
Also in This Series