Love Songs from a Shallow... »

Love Songs from a Shallow Grave 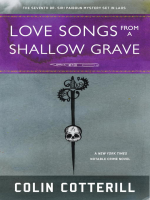 Description
The seventh Dr. Siri Paiboun mysteryWhen a Lao female security officer is discovered stabbed through the heart with a fencing sword, Dr. Siri, the reluctant national coroner for the People's Democratic Republic of Laos, is brought in to examine the body. Soon two other young women are found killed in the same unusual way. Siri learns that all three victims studied in Europe and that one of them was being pursued by a mysterious stalker. But before he can solve the case, he is whisked away to Cambodia on a diplomatic mission. Though on the surface the Khmer Rouge seem to be committed to the socialist cause, Siri soon learns the horrifying truth of the killing fields and finds himself thrown into prison. Can the seventy-four-year-old doctor escape with his life?From the Trade Paperback edition.
Also in This Series