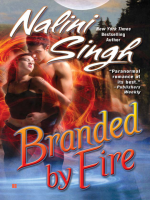 Description
#1 New York Times bestselling author Nalini Singh allies two fierce changelings in this explosive Psy-Changeling novel. Though DarkRiver sentinel Mercy is feeling the pressure to mate, she resists savagely when Riley Kincaid, a lieutenant from the SnowDancer pack, seeks to possess her. The problem is not simply that he pushes her buttons; the problem is that he's a wolf, she's a cat, and they're both used to being on top. But when a brilliant changeling researcher is kidnapped from DarkRiver territory in a seemingly senseless attack, Mercy and Riley must work together to track the young male—before his shadowy captors decide he's no longer useful. Along the way, the two dominants may find that submitting to one another uncovers not just a deadly conspiracy, but a passion so raw, it'll leave them both branded by fire...From the Paperback edition.
Also in This Series