1918 Year of Victory: The End of the Great War and the Shaping of History 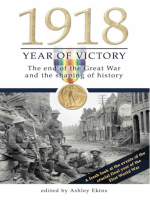 World War I, 'The Great War' involved the mobilisation of some 70 million soldiers worldwide. It produced images of such pervasive horror on the Western Front that it defined warfare in human memory long into the twentieth century. The war also left a grim legacy: 13 million people died, 9 million of them combatants. Over one-third of those who died were 'missing', having no known graves. The chapters in this book had their origins in an international conference, 1918 Year of Victory, convened by the Australian War Memorial in Canberra in November 2008 to mark the ninetieth anniversary of the end of the Great War. World War I scholars from a number of nations, many of them renowned specialists in their field, gathered to present their research findings and to share their insights into issues surrounding the ending of the Great War, its memory and continuing impact. This highly readable book is a collection of these presentations.

1918 Year of Victory is an original and very readable account of one of the most significant and often misunderstood events of the last century. With an historian's eye for clear headed analysis combined with incredible attention to detail and narrative, the Australian War Memorial's Ashley Ekins presents a compelling account of the world's first 'great war' and its legacy.

The Great War of 1914–1918 casts a long shadow. It is over 90 years since the last shots were fired, ending a global conflict that consumed the lives and hopes of so many of its generation. The catastrophic scale of the war and its immense human cost haunted the survivors and in just over a decade, the victory of 1918 was eroded by the apparent failure of the Versailles peace settlement, the rise of Nazism and the approach of the Second World War. Many believe the Great War set the pattern for the large-scale violence, devastation and genocide witnessed throughout the wars of the 20th century.

The recent deaths of the last remaining survivors of the First World War have revived poignant memories and re-established a vigorous debate as to what, in the end, it all meant. Was the war, in effect, a futile 1561 days of incredible carnage paving the way for yet more misery, death and destruction with the Second World War? Or did the end of the war create the modern world, shaping our era's attitudes, social relations, art and culture?

The Australian War Memorial is leading this global reassessment of the First World War. The chapters in this book had their origins in an international conference, 1918 Year of Victory, convened by the AWM in Canberra in November 2008 to mark the ninetieth anniversary of the end of the Great War. Lively, authoritative and wide-ranging presentations were made by the world's leading scholars, comprehensively revealing new thinking and challenging many of the assumptions and common perceptions surrounding the conflict.

At once an informed overview for general-interest readers and a superb resource for serious buffs, this extraordinary volume is sure to become one of the fundamental books in any war buff's library.

Ashley Ekins (volume editor) is Head of the Military History Section at the Australian War Memorial in Canberra. He specialises in the history of World War One and the Vietnam War and has written widely on these conflicts and on the role of Australian soldiers in the Great War.