The Truth Is The Light »

The Truth Is The Light 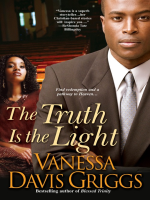 The newest member of Followers of Jesus Faith Worship Center stirs up more troubles than blessings when he decides to re-dedicate his life to God. . .

As the son of a well-known minister, Clarence Walker knows his decision to leave his father's flock and join Pastor George Landris's mega-church ministry is a controversial one. But little does he suspect it will ignite a firestorm of revelations that will shake the heart of the congregationand his very own family. . .

From a long buried secret that will bring the paternity of not one, but two women, to light, to a parishioner whose long awaited love match may be thwarted by resistance from an unexpected source, hidden truths are coming to the surface. But most shocking of all is that Clarence's own father, Reverend Marshall Walker, may not be the pious figure he claims to be. And since evidence of his transgressions lies in the hands of his arch nemesis, it's only a matter of time before Reverend Walker's life and his church falls like a house of cards.

Perceptive, moving, and emotional, Vanessa Davis Griggs once again celebrates church life with its triumphs, tragedies, and all too human mistakes, proving that without truth, there can be no light. . .

"A smart novel that addresses an issue that many in the church shy away from: divorce with frank realism . . .[and] characters who are refreshingly (for inspirational fiction) imperfect." Library Journal on Practicing What You Preach

"Vanessa is a superb storyteller. . .her Christian-based stories will inspire you. . .."ReShonda Tate Billingsley