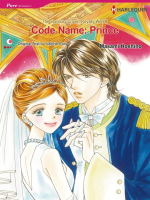 Was I kidnapped by an angel? While Edinburg kingdom is rocked by the disappearance of the king, Ben, a marine acting as a double for his cousin, Prince Nicholas, is kidnapped. As he lies strapped to a bed, he is met by a beautiful woman smelling of roses. Seeing guilt in her eyes, Ben is sure she's taking part in this kidnapping against her will. Whatever her circumstances, Ben vows to protect her! Part 3 of the "Wedding of the Century—Kingdom of Edinburg" 4-part miniseries!