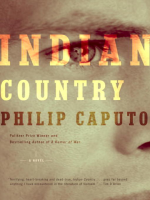 Indian Country is a sweeping, brave and compassionate story from one of our most acclaimed chroniclers of the Vietnam experience.Christian Starkmann follows his boyhood friend, an Ojibwa Indian called Bonny George, from the wilderness of Michigan's Upper Peninsula, where they roamed, hunted and fished in their youths, to the wilderness of Vietnam, where they serve as soldiers in the same platoon. After returning home from the war, his friend buried on the battlefield he left behind, Christian begins to make a life for himself. Yet years later, although he is happily married to June, a good-hearted social worker, and has two daughters, Christian is still fighting--with the searing memories of combat, with the paranoid visions that are clouding his marriage and threatening his career, and most of all with the ghost of Bonny George, who haunts his dreams and presses him to come to terms with a secret so powerful it could destroy everything he has built.