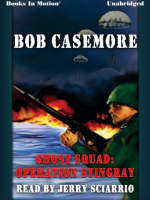 The Ghost Squad is a combat hardened special force trained to operate behind enemy lines. Its mission this time is to find a renegade American with an Australian accent, code-named Stingaree, who is sending information via short-wave to the Japanese regarding American troop movements. The idea is to capture the man and remove him from New Guinea and replace him with a look-alike imposter who will transmit erroneous info to the Japanese. This is vital, so that U.S. forces can land troops in Dutch New Guinea with a minimum of casualties.