Staying home is a killer »

Staying home is a killer 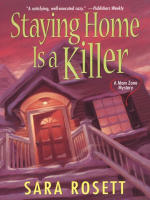 The ever-organized Air Force wife tackles a case of murder in the "satisfying, well-executed second Mom Zone cozy" from the USA Today bestselling author (Publishers Weekly).Ellie Avery balances motherhood, marriage, and her own business—Everything in Its Place—with cheerful efficiency. A maestro of organization, she sees her life as an easy checklist that does not include the untimely death of Penny Follette.Unlike the police, Ellie isn't convinced Penny's death was suicide. But it's an uphill battle getting the officials to take her seriously. Then another spouse is strangled, and someone tries to poison an outspoken female Air Force pilot.Poking about in closets and peeking through drawers, Ellie hopes to find the common thread tying the crimes together. With her husband Mitch about to be deployed in the "sandbox" (that's the Mideast for us civvies), she wants some quality time with her significant other. As the schedule tightens and the mystery heightens, Ellie's out to prove that home is not for killers!Filled with Ellie Avery's great organizing tipsPraise for the Ellie Avery Mystery series"A fun debut for an appealing young heroine." —Carolyn Hart, New York Times bestselling author"Crackles with intrigue, keeps you turning pages." —Alesia Holliday, New York Times bestselling author"Sharp writing, tight plotting, a fascinating peek into the world of military wives. Jump in!" —Cynthia Baxter, author of the Lickety Splits Mysteries"Mystery with a 'mommy lit' flavor. A fun read." —Armchair Interviews