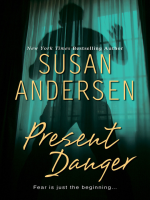 A woman tries to outrun her brutal ex-husband in a thriller by a New York Times–bestselling "consistently excellent voice in romantic suspense fiction" (Romantic Times).

He'll find her. Sooner or later, Aunie Franklin's ex-husband, Wesley, will track her down. She's moved clear across the country to start over, but she knows it's not far enough from a madman obsessed with making her pay . . .

James Ryder's new tenant is running from something. Her Southern sass doesn't hide the fading bruises on her face. James doesn't need more complications in his life, but he can't ignore her rising fear. Especially once the phone calls and threats begin . . .

Every day brings Wesley one step closer. Aunie will be his again, to possess—and to punish. Because the past she tried to flee is about to become her present. And he'll make sure she never escapes again . . .

Praise for the writing of Susan Andersen

"A winner." —PublishersWeekly on Bending the Rules