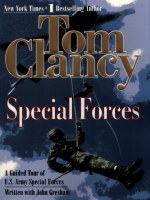 They are sent to the world's hot spots-on covert missions fraught with danger. They are called on to perform at the peak of their physical and mental capabilities, primed for combat and surveillance, yet ready to pitch in with disaster relief operations. They are the Army's Special Forces Groups. Now follow Tom Clancy as he delves into the training and tools, missions and mindset of these elite operatives.

The making of Special Forces personnel: recruitment and training

Roles and missions: a mini-novel illustrates a probable scenario of Special Forces intervention

Exclusive photographs, illustrations and diagramsPlus: an interview with General Hugh Shelton, USA, Chairman of the Joint Chiefs of Staff (and the former Commander-in-Chief of the U.S. Special Operations Command-USSOCOM)