Maryland in Black and White »

Maryland in Black and White: Documentary Photography from the Great Depression and World War II 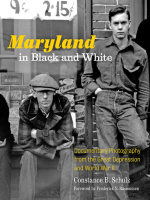 Between 1935 and 1943, the United States government commissioned forty-four photographers to capture American faces, along with living and working conditions, across the country. Nearly 180,000 photographs were taken—4,000 in Maryland—and they are now preserved in the Prints and Photographs Division of the Library of Congress. Constance B. Schulz presents a selection of these images in Maryland in Black and White.

Maryland could be regarded as a microcosm of America, a middle ground where beach and mountain, north and south, urban and rural, black and white, farmer and businessman, rich and poor, young and old, meet. This period witnessed an important turning point in the state's history. The pace and nature of those changes varied from region to region, but even in areas that seemed most resistant to change—the Chesapeake Bay, where oyster tongers harvested their catch using methods unchanged for centuries, or the mountains and streams of Garrett County, where the seasons timelessly repeated themselves—the momentum toward a modern economy, influenced if not dominated by urban and national concerns, had an significant impact.

Within these pages, the farms and coal fields of 1930s and '40s Western Maryland, the tobacco fields of southern Maryland, watermen in wooden boats along the Eastern Shore, and smiling couples dancing at a wartime senior prom come back to life. These photographs reveal places we know but scarcely recognize and give us another look at the people of "the greatest generation."