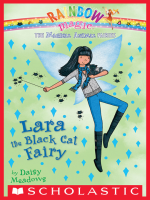 Description
Rachel and Kirsty are off on another exciting adventure-with the Magical Animal Fairies!

Rachel and Kirsty are heading to a weeklong outdoor adventure camp! But another fairy adventure is just around the corner, too. Jack Frost has kidnapped the fairies' seven magical animals! The animals each look after a special kind of magic. Now that they're missing, everything in Fairyland and the human world is a magical mess!

Lara the Black Cat Fairy's magical kitten, Lucky, has had an awfully lucky escape from the goblins! But they're hot on her trail. It's up to Rachel and Kirsty to stop them!