Dating Tips for the Unemployed »

Dating Tips for the Unemployed 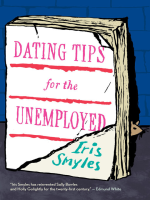 One of the Believer's Best Books of the Year: One woman's journey through that awkward period between being born and dying. A modern odyssey about trying to find one's home in the world, this collection of wickedly funny and offbeat vignettes touches upon quantum physics; the Donner Party; arctic exploration; Greek mythology; Rocky I, II, V, IV, VI, and III respectively; and literary immortality. Dating Tips for the Unemployed "melds novel, autobiography, and all manner of asides as [the author] flails at art, love, and friendship with the wry intelligence of someone just wise enough to realize they have no idea what they're doing. A flat-out joy to read" (O, The Oprah Magazine). "In engaging episodes, Iris-the-character neurotically navigates dating in New York City, smokes pot on Greek islands with hapless lovers, drinks too much, deals with disapproving family, and eats a lot of cannoli. Smyles's surreal, lyrical voice elevates these everyday scenarios into the realm of the fantastic and absurd. Included in the book are hilariously stylized advertisements full of false promises, such as 'Health Secrets of the Roman Empire' and 'Have Your Portrait Painted By An Elephant!' all for a price. Smyles is sharp, melancholy, and wickedly funny. She is unafraid to reveal and revel in her character's flaws because it is what makes them so achingly, relatably human." —Interview "Something like a cocktail of Dorothy Parker, James Joyce, and Philip Roth iced, sweetened, and blended." —The Nervous Breakdown "Whimsy, satire, and rollicking social commentary . . . Ms. Smyles is a misanthrope-of-the-people, a standout on the order of Fran Lebowitz." —The East Hampton Star