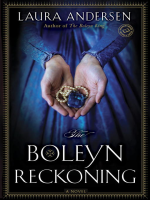 Description
Perfect for fans of Philippa Gregory and Alison Weir, The Boleyn Reckoning heralds the triumphant conclusion of Laura Andersen’s enthralling trilogy about the Tudor king who never was: the son of Henry VIII and Anne Boleyn—Henry IX—who, along with his sisters and those he holds most dear, approaches a dangerous crossroads.

The Tudor royal family has barely survived a disastrous winter. Now English ships and soldiers prepare for the threat of invasion. But William Tudor—known as Henry IX—has his own personal battles to attend to. He still burns for Minuette, his longtime friend, but she has married William’s trusted advisor, Dominic, in secret—an act of betrayal that puts both their lives in danger. Princess Elizabeth, concerned over her brother’s erratic, vengeful behavior, imperils her own life by assembling a shadow court in an effort to protect England. With war on the horizon, Elizabeth must decide where her duty lies: with her brother or her country. Her choice could forever change the course of history.

Praise for The Boleyn Reckoning

“Powerful . . . action, intrigue, star-crossed lovers, and all the drama period fans have come to expect . . . Fans should remain satisfied with the thrilling finale-for-now.”—Booklist

Look for special features inside. Join the Random House Reader’s Circle for author chats and more.