Sammy Keyes and the Psycho... » 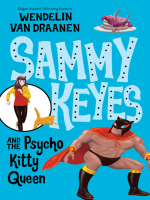 It's Sammy's birthday, which should be a good thing, except that Dorito, Sammy's cat, is missing, and while Sammy's searching for him, she finds three dead cats in dumpsters around town. Worse still, Miss Kitty, a psycho cat lady, blames Sammy when it turns out one of the dead cats belonged to her. As if Sammy didn't have enough on her hands investigating these furry felonies, her mother has a confession to make: she lied about Sammy's age so she could start her in school a year early. So—surprise!—Sammy isn't turning 14 at all, she's going to be unlucky 13 for another whole year.

The Sammy Keyes mysteries are fast-paced, funny, thoroughly modern, and true whodunits. Each mystery is exciting and dramatic, but it's the drama in Sammy's personal life ...
Also in This Series