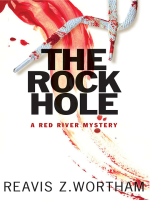 Top 12 Mysteries of 2011 by Kirkus Reviews Finalist in the Benjamin Franklin Awards, Mystery

"An unpretentious gem written to the hilt and harrowing in its unpredictability." --Kirkus ReviewsSTARRED review

It's 1964: farmer and part-time Constable Ned Parker combines forces with John Washington, the almost mythical black deputy sheriff from nearby Paris, to track down a disturbed individual who is rapidly becoming a threat to the small Texas community of Center Springs.

When Ned is summoned to a hot cornfield one morning to examine the remains of a tortured bird dog, he finds a dark presence in their quiet community. Ned is usually confident when it comes to handling moonshiners, drunks, and domestic disputes. But when the animal atrocities turn to murder, the investigation spins beyond his abilities.

After a dizzying series of twists, eccentric characters, and dead ends, Judge O.C. Rains is forced to contact the FBI. Worse, sinister warnings that Ned's family has been targeted by the killer lead the old lawman to become judge and jury to end the murder spree in the Red River bottomlands.