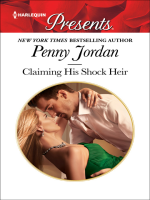 Description
Re-read this classic romance by New York Times bestselling author Penny Jordan,previously published as What You Made Me in 1984 A week ago Philippa's life had been relatively uncomplicated. But that was before shereturned to the village she left eleven years ago; young, frightened and pregnant. Havingraised her son alone, Philippa thinks nothing could ever frighten her again...until shemeets Scott Garston--her first love, hard-hearted tycoon...and father of her child! Scott has never forgiven Philippa for abandoning their relationship--his reputation forruthlessness is entirely her responsibility! So when he realizes the chemistry betweenthem still burns, it's his perfect chance for vengeance. And when he discovers theshocking secret she's been keeping from him Scott is determined to claim his revenge and his son!
Also in This Series