Fire in the Stone »

Fire in the Stone: Prehistoric Fiction from Charles Darwin to Jean M. Auel 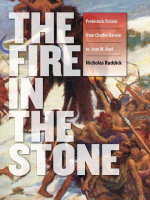